During my test of AppGuard some new variants of ransomware showed up in the wild.

ReaQta reported a new and massive worldwide Locky ransomware spam campaign. The new variant downloads the payload in encrypted form from the attacker’s command and control server and decrypts it before execution on the victim’s system. This makes it harder for traditional anti-malware systems to identify the payload as malicious.

Since the decrypted version is executed from User Space AppGuard blocks the execution.

Microsoft reported a new variant called ZCryptor which behaves like a worm:

I had to deactivate all Windows 10 security features on my test system to download the malware sample from malwr.com to the User Space of my account:

Again, AppGuard blocked the execution of z_crypt.exe, thus prevented the malware from becoming persistent and from encrypting my documents: 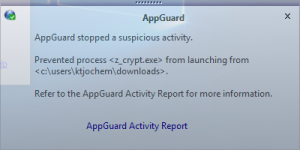 Even if one receives ZCryptor on a portable device AppGuard will block the execution due to the default Removable Media rule: 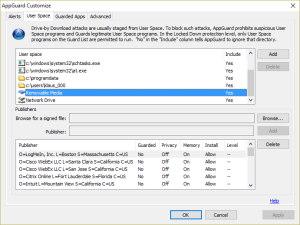 More about AppGuard next week.